Once upon a time, Harvey Hamster bought a book called "How to Make a Robot". Then he went to the hardware shop and grocers to get the parts and busied himself making a Blue-Jumper-Cleaning Robot as an extra special present for Dr. Doggie, whom he liked a great deal (but only in a very normal and platonic way). Harvey liked Doggie so much that he didn't even mind when Doggie made lots of noise indulging in his new hobby of making washing-up liquid bottles out of old spaceships. Quite often Harvey would just laugh and if it got too noisy he would inject Doggie with morphine and lager or maybe just strap him down to the kitchen table for five and a half days. Harvey worked all day on his present and couldn't wait for Doggie to come home so he could give it to him.

Later that day, Doctor Doggie came home from a hard day designing the new Wembly Stadium complex, and he was very suprised to find Harvey in a rather happy mood. Usually Harvey was miserable unless he'd had his morning tottie, especially when the Nazi season had ended (France won last year, having narrowly beating Germany four reichs to three).

"I've got a present for you," said Harvey. "It's a Blue-Jumper-Cleaning Robot. Would you like me to switch it on?" Doggie smiled and said he would very much. Lucky old Doggie! His blue jumper was really smelly at the moment because Doggie thinks that hygiene is the DNA sequence which says how many drugs someone has taken today.

Unfortunately, when Harvey flicked the switch, something started to go very wrong with the Robot's metal brain. Instead of trying to clean Doggie's blue jumper, the metal helper decided to be a tin opener. It grabbed hold of Doggie and then proceeded to open the top of the poor Doctor's head and pull the cute civil engineer's brain out, placing it neatly in a nearby bowl (which didn't take very long).

Harvey wasn't very good at cybernetics, being a hamster and all, and looked on in horror as he realised that he must have typed in the wrong program. Quickly considering what to do now that his best and fluffiest friend was in danger, our cute hero bravely legged it and hid in the pantry, leaving Doggie to his fate.

Unfortunately, the robot hadn't finished there. It started opening all manner of things. It opened the TV, the hamster ball, a new Kwiksave, and then started to open the pantry!

"Oh Bugger," said Harvey, who was by this time prepared to meet his maker. Then something in the pantry caught his eye. It was a tin of Gorilla. What a stroke of luck! Harvey quickly handed the tin to the rampaging robot.

The robot opened the tin out popped a gorilla called Gaylord, who said "Me like to bash shiny bleeping things almost as much as me like eating mookie". As Harvey was fresh out of mookie, Gaylord began smashing the naughty metal beast into a zillion bits. Gosh!

Fortunately, Doggie's trepanation didn't effect any major organs, although he kept getting words and numbers mixed up for a while. As an extra special treat, Doggie, Harvey and the gorilla went on a camping holiday in the Hebredes, where Doggie got a starring role in a film about Bowler Hats, Harvey learned all about Basket Weaving and Gaylord got a job presenting The South Bank Show. He always wanted to be Melvyn Bragg but there wasn't much call for that in a tin. 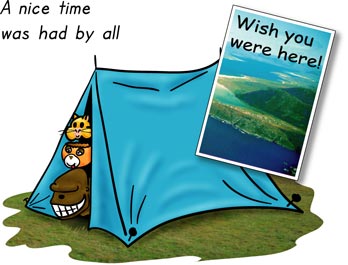 And they all lived happily until the next time, when one or all of them will no doubt be killed in a noisy, smelly and/or stupid way.