Once upon a time, Doggie and Harvey were in bed (but more in a Morecambe and Wise way than, say, a Michael Barrymore and 'man in pool' way but nothing was ever proven and it wasn't anybodies fault). Suddenly, Harvey heard a noise coming from outside! As you probably know, Hamsters are very inquisitive, and so Harvey prodded Doggie with a red-hot poker to get him to investigate. 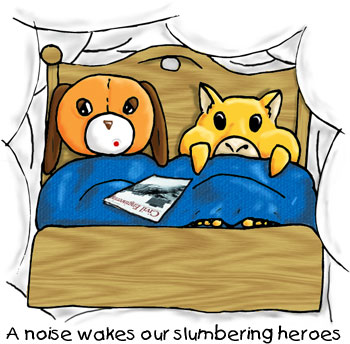 Armed only with objects that he had at hand (a small pickled onion, a knockwurst sausage and a 5.56 mm NATO bullpup assault rifle (which Gaylord left for him to protect his stash of Mookie)

Gaylord's exact words to Doggie were "You protect Mookie else when I get back I find missing mookie and jam them in you. Now shut up and give me more mookie. Me eat yumyums".

, Doggie intrepidly went towards the sound of the disturbance. 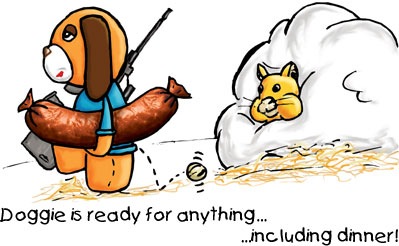 No sooner had he stepped out of the door that he was confronted by a tall bunny rabbit carrying a flick hammer and a soul full of hate. Gosh! 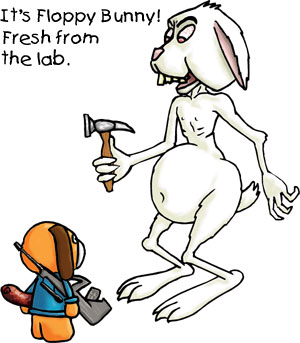 "That's a nice hammer" said Doggie, who knew quite a lot about carpentry, social science and the 1920's Soviet Montage of Sergei Eisenstain as well (and particularly liked the bit when the pram fell down the stairs). And before you could say "Battleship Potemkin", Doggie had been bashed and bashed until all that was left was a doggie-coloured pulp!

"Ow!" said what was left of Doggie's head. "That wasn't very nice - in fact I think you're an uncouth lollygagger."

What Doggie actually said was "That wasn't very nice, you fucking fucker. Oh, fuck I can't feel my fucking legs! Where are my legs? My fucking legs have gone! When I find them I'm going to come over there and ram them down your fucking throat until you choke on them you bloody sod." Of course it just wouldn't do in a childrens story, but Doggie could probably be forgiven as he had just been woken up in the small hours. 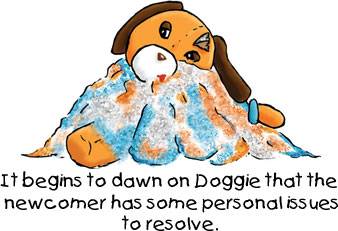 Then the mean rabbit started pointing at things, waving his flick hammer around and dictating terms. "I want some nice pink wallpaper putting up, some brocade would be passable, and a dart board shaped like Elmer Fudd. I want some posters of Bunny Langford, Bunny & Clyde, Bunny Prince Charley and a big carrot shaped like that dead geezer from Inspector Sweeney..." 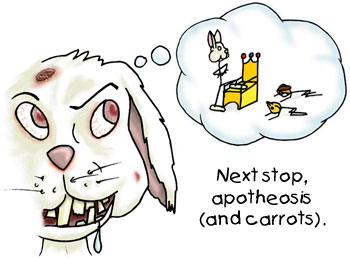 "Could I just say something if I may?" inquired Harvey quite politely. He learned this from Edward Woodward, who once had two heart attacks while filming "The Equalizer" and was so polite that he didn't realise until the third.

"What is it, Bogbrush?" snarled the bunny, waving his hammer menacingly towards Harvey.

"Mountains ahoy!" said Harvey, then pulled out his flick Everest and squashed the rabbit flat. 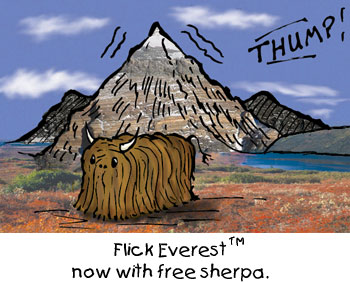 And, after turning Floppy into a sofa, Harvey quickly put Dr. Doggie back together again and pulled four cans of lager from his pouch. They spent the rest of the night watching Snooker and eating a cake shaped like the Dalai Lama. 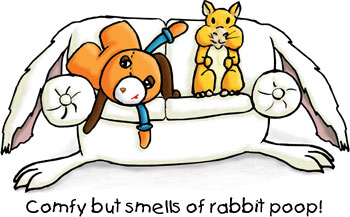 "He doesn't look like he's eighty years old, does he?" said Doggie.

"No" laughed the nice hamster. "I expect it's all the travelling he does."

And they all lived happily until the next story (where somebody cute will probably die in an unnecessarily horrible way and reassembled in the wrong order).